Tiffany Jewelers on New York’s Fifth Avenue has showcased, for more than half a century, five “little windows” that have mesmerized the world with brilliant inspiring works of art. Each artistic work serving as a wondrous setting for a fine item of Tiffany jewelry. Both complimenting each other, in a window setting that has served as a perfect little “jewel box” for the entire world to enjoy.

John Lennon, just before he was so violently shot dead in front of his New York City home, a short distance from my Manhattan residence, expressed his concern over how today’s movies depict humanity’s future filled with violence.

When Gene Moore, Tiffany’s window display artist, asked me to design five “Models of the Future” for Tiffany’s windows, I was inspired by my ex-Beatle neighbor to present Manhattan, my world at the time, as having a more positive hopeful vision for its future.

Meeting with Gene Moore inside his private office was like stepping into a world unto itself. Tacked along the walls were hundreds of photographs showing Mr Moore acquainted with every celebrity imaginable. He seemed to know everyone. Mr Moore was warm and personable, and enthusiastic about my suggestions.

I was to have my scale model designs ready for installation next October. I loved New York in October. The early winter chill. The windows of the world’s finest stores prepping for the holidays. I felt it would be the perfect moment in time, before the future arrived, to showcase my designs.

At that time I was quite busy, working for SOM, Rockefeller, Douglas Leigh, the Muppets, others. I used my evenings inside my Upper West Side apartment close to Central Park to imagine, draw, sketch, cut, glue and paint. Until I completed five unique designs. Each one, I hoped, an uplifting futuristic vision. One afternoon in October I rented a vehicle and transported my scale models over to Tiffany & Co. Jewelers. Mr Moore loved what he saw. I left his office feeling quite happy. I didn’t even mind that the city of New York, while I was inside Tiffany Jewelers, had towed away my car. 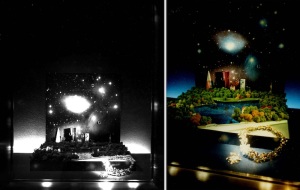 A few days later, very much on purpose, I walked past Tiffany’s. And there, inside those famed five windows, were my models. It brought a deep warm inner smile. I decided to walk by Tiffany’s several times each day. And while doing so, I enjoyed observing all the local New Yorkers plus international tourists peering in at my designs. 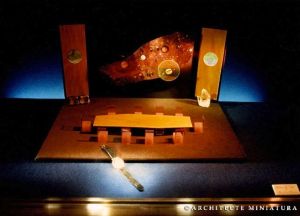 One afternoon I observed an attractive female, about my age, studying my work. I thought she might enjoy ‘meeting the artist’ and decided to introduce myself. After tapping her on the shoulder and saying a few words I quickly gleaned that she didn’t speak a single word of english. I tried a few more times, using very pigeon expressions, to convey to her that I was the artist who’s works she was admiring. She didn’t understand a word. Finally, I pulled out my drivers license and also showed her my name on the small hand-printed signs on display inside Tiffany’s windows.

When she saw that the name on the sign was the same as mine her eyes widened. She turned toward me, smiled, and politely shook my hand. But that was as far as any communication could possibly go before we parted ways forever. I hope at least her meeting me was a story she would share with others after returning to her home somewhere far away. 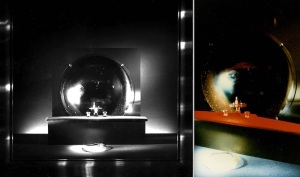 The evening I decided to take photographs of my work was the same evening Gene Moore had arranged for a professional photographer to do the same for him. It was a very cold night. My frozen fingers could only snap a shot or two before I had to repeatedly run over to Rumpelmayer’s at the nearby St. Moritz for a delicious cup of hot chocolate many, many times that night. How we artists are forced to suffer sometimes.

One or two years later new TV shows & movies presented futuristic scenes and settings that looked fairly familiar to me. Similar to some of my scale model designs. And I wondered, could my little displays, that tried to say so much, have inspired someone? Did I make a mini difference?

About a week after John Lennon passed away, Skidmore Owings & Merrill, where I worked at the time, held their annual Christmas Party at Tavern on the Green. 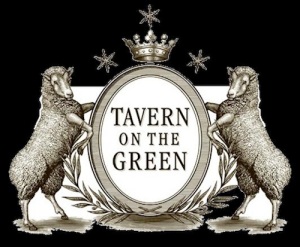 No one was in a celebratory mood that evening. Especially with the Dakota building, John and Yoko’s home, so close by. Visible through the trees outside Tavern’s windows.

Even SOM’s private band put away their musical instruments and ended their set early. The restaurant’s piano was left unattended. I stepped over and began to play Tavern on the Green’s piano. Just like I used to play pianos in clubs and restaurants while supporting myself through college. 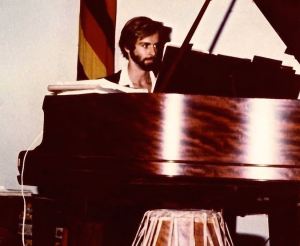 A few fellow SOM associates, friends from work, who just didn’t want to go home that evening, gathered around the piano where I was playing. Soon requests were made. Each request a Beatle tune. I gladly, yet sadly, played them all. Drinks in our hands. Beatle songs performed on the Tavern’s piano. 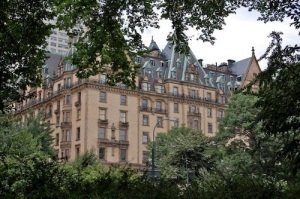 The Dakota building just outside, where John Lennon’s blood was still fresh on the ground. It was a very reflective night that Christmas season.

One that changed all of our lives forever. Hopefully for the better.