White hair and beard, a constant smile with a twinkle in his eye, a tiny bit chubby, always ready to share an amusing charming story about someone very famous, someone he knew personally, well traveled everywhere, always observing the world through a beautifully colored prism, a lover of sweets even though he remained a very strict vegetarian. I’d never met Santa Claus in the flesh before, until the day I walked into Francis Thompson Studios.

Francis Thompson became famous due to one particular early film, “NY NY”. Shown in MOMA, the Museum of Modern Art, quite an exclusive accomplishment. He personally shared with me that while filming NY NY he was reclined on his back on a New York sidewalk, pointing his camera straight up the facade of a tall NY skyscraper. When a man wearing a cape and sporting a beret forcefully tapped his cane near Francis Thompson’s feet.

“What are you doing there?” demanded Frank Lloyd Wright, the famous architect. “I’m improving architecture.” Francis replied. Wright did not agree, and huffed off.

When I asked Francis Thompson of other fascinating friends he knew, he shared with me the time he attended a dinner party in Princeton. Also in attendance was Dr & Mrs Einstein. When the hostess asked Dr Einstein if she could take his coat, a type of “frock” coat as Francis Thompson described it to me, Dr Einstein replied, “Oh, no. I’m not wearing anything underneath!”

There was a particularly stress filled meeting inside his Studio one day with everyone in attendance. The stress built up until it hit a wall. Francis Thompson chuckled. All of us looked at him. “This reminds me of the time…” he began. And before anyone knew what was happening to us, Francis captivated us with a charming reminiscence concerning one of his famous friends doing something interesting and compelling. So that by the end of his story all of us had completely forgotten what our tension was all about. I was amazed. Never in my entire life, not even during yoga & meditation classes, could I recall anyone so able to so deftly deflate such peaked tension and convert the pressure, anxiety and aggression of everyone there into such soft benign & congenial distraction.

We each rose from our seats smiling, getting along. Completely changed.

Francis Thompson was also famous for being the inspiration behind IMAX films. It was my privilege to view his two more famous works, “To Fly” and “Living Planet” and to hear from him personally his behind-the-scenes recollections. 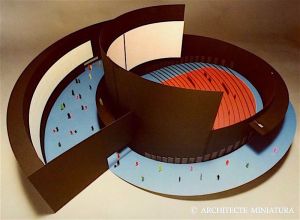 I had been hired, by Francis Thompson himself, to assist with a scale model design of a theater experience for a World’s Fair. It was fun to hear the ideas being tossed around, the imaginations of how brand new media could be included in a setting such as this. One approach was suggested for the waiting area where attendees would gather prior to their entering the main theater. A wall would be covered with screens to be filled with multiple rear projected synchronized slides.

Someone mentioned the price of a slide projector light bulb, and how often they needed to be replaced. While everyone continued discussing the concept, I quietly took out my calculator and multiplied the number of light bulbs by their length of life by the length of time the World’s Fair would be open, and came up with an astoundingly high figure. I quietly got everyone’s attention and shared the number on my calculator. The concept of multiple slide projectors was abandoned.

Francis Thompson had one long time associate, Alexander Hammid, his film editor. Originally from Czechoslovakia, Hammid was gifted, talented and very pleasant. Displayed above Hammid’s desk was an Oscar. That small gold statue everyone in the film industry covets. I asked if I could hold it. When it was handed to me I was stunned by how heavy it was. My arm dropped at least a foot due to its weight. I recalled how many times I’d seen actors do the same when their Oscars were handed to them during the award ceremony. It was rather magnificent to hold such an emblem in both my hands. So golden in color. So meaningful to so many.

I’ve read since that Francis Thompson retired approximately one year after my work for him was over. He was older even then, yet still so filled with energy. Vibrant. Witty. Kind, wise and insightful. A genius, in his own unique way.